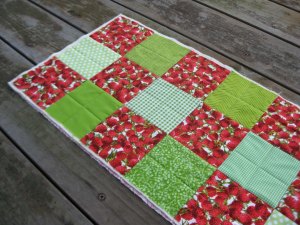 I loved Laura Ingalls Wilder’s Little House books.  Reading about Laura and her sister Mary sewing on their quilts is what first got me interested in quilt-making.  Of course I had no clue how to make a quilt, let alone how to start the process.  This was in the early eighties, and I lived in a traditional Filipino household in rural Hawaii.  All I knew was that I wanted to be sewing on a quilt, too.

(It would have to be a nine-patch one, though, like Mary’s.  Because at least I could figure out what nine-patch blocks were.  Laura’s quilt was called Dove in the Window, and what the hell was Dove in the Window?  Google wasn’t around when I was growing up, and even if it had been– our family wouldn’t have owned a computer.  And even if we did have a computer, my brothers would have been hogging it, and then my dad would have come along and he would have yanked out the plug and maybe even broken the whole damn thing, just to shut everyone up.)

Anyway, then I read Lois Lowry’s A Summer to Die.  I must have been about eleven or twelve at the time. (Another aside– when I think about it now, that is really heavy subject matter for a kids’ book.  I mean, a story about your fifteen-year-old sister’s final stages of life– a summer to die— Really?)  So while it was a very stressful time for everyone in the family in the book, the mother of the narrator started a patchwork quilt, using fabric from her daughters’ outgrown childhood clothing.  And the idea of that quilt stayed with me. 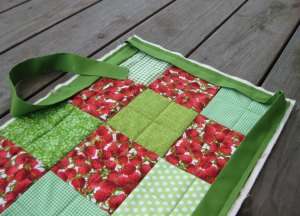 I moved on to other books and other interests.  I taught myself how to crochet from a library book when I was in the seventh grade.  I went on to high school, undergrad, and then graduate school.  I got a master’s in creative writing.  I went out into the job market and landed in teaching.  Time passed.  I didn’t even recognize it, but looking back now– I was unhappy and depressed.  I wasn’t doing the things I loved.  It finally took some prodding from Sean and a move across the country for me to admit that I needed to make drastic changes.  Or else I would be dying the slow painful life of a central Florida middle school teacher bitterly counting the years to retirement.

In 2003, I went back to graduate school in a completely different discipline.  To deal with the stress of being a broke, thirty-something-year-old grad student, I learned how to knit.  I knitted and crocheted through years of three-hour-long classes, eight-hour-day seminars, multiple unpaid traineeships, a dissertation,  pre- and post-doc internships, four separate licensing exams, and finally, finally, I got to the point where I was securely established in a full-time permanent state job with benefits and a pension.  I was a long way away from the little girl who liked to read all the time and write stories and daydream about making a patchwork quilt out of old faded gingham dresses. 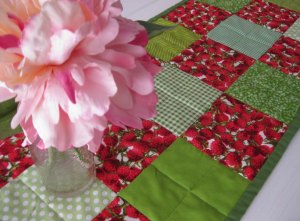 Then it happened just a little over three months ago.  Back in September, when my colleague and I should have been watching a webinar but were reading the newspaper instead, I noticed a small ad for a local fabric shop, Picking Daisies.  They were offering a beginner’s quilting class, and the featured project was a patchwork quilt made out of blocks.  After all these years, it came at just the right time.  I was in the right place. 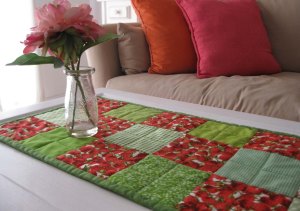