The heel is turned and I’m on the cuff. 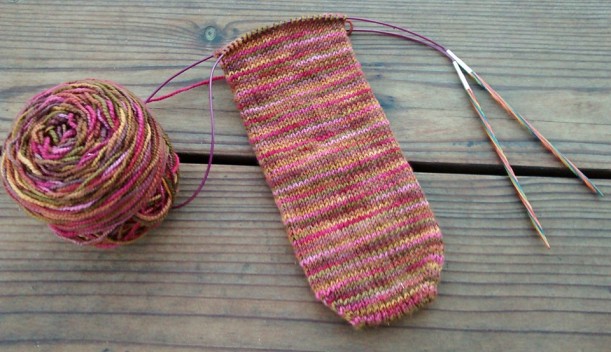 This is how my morning began:

We both knew the drill. “Thanks, Sarge,” I said. “I’ll talk to him after I finish up this appointment.”

“Great,” the sergeant said. He turned to leave the room and just as he was walking away, my phone rang.

“Dr. V,” the person on the other end said when I answered. It was one of the mental health administrative office technicians. “We received a call from the clinic regarding one of your patients. He’s not saying that he’s suicidal, but they have some concerns. They need you to go over there as soon as possible and talk to him.”

I said, “I just spoke to the sergeant, and he told me that they’ve got one of my patients in the holding cell right now, saying he’s suicidal.”

“This is a different inmate,” the office tech said.

I got off the phone and turned to the new arrival who’d returned to his seat across my desk. He was casually looking at the posters on the wall and acting like he hadn’t heard anything that had been said in the last three minutes.

I looked at the day’s schedule of appointments and silently said goodbye to any remaining bit of free time I may have had left.

“Listen,” I said. “Can you come back this afternoon? I’ve got a couple of emergencies to take care of.”

Remember how I learned to make a mitered square in knitting class on Monday?  And I shared a photo of my first completed square?

Well, I thought I would work on the second square that I’d joined to the first one.  I got my knitting bag that I brought to class, and I dumped out the contents, which included several small balls of scrap sock yarn.  And discovered this.

Some people might have the patience to unravel this mess, but I don’t have that patience.  Life is too short.  I’m getting the scissors.

I’d requested this Tuesday off from work because Pat and I had the knitting class last night in Ventura, and I knew I’d want to sleep in and give myself time to drive back to Morro Bay today.  Also, Sean doesn’t teach a class on Tuesday mornings, so we were able to grab some breakfast at Cafe Nouveau and spend a little bit of time together before I hit the road.  It was a nice little way to celebrate the 300th day of 365 days handmade.

Looking forward to cooler days ahead! 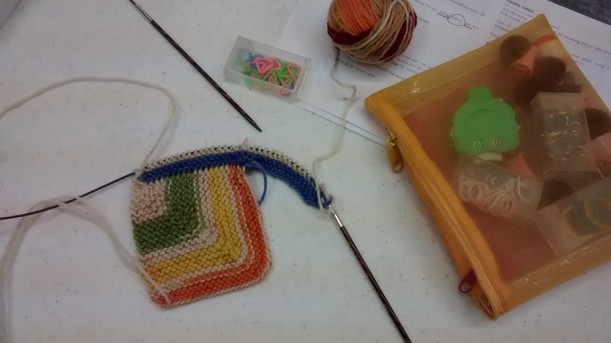 This evening my good friend Pat and I attended a knitting class to learn how to make a modular blanket out of mitered squares.

Here is my first square that I finished in class:

Here is the instructor’s sample: 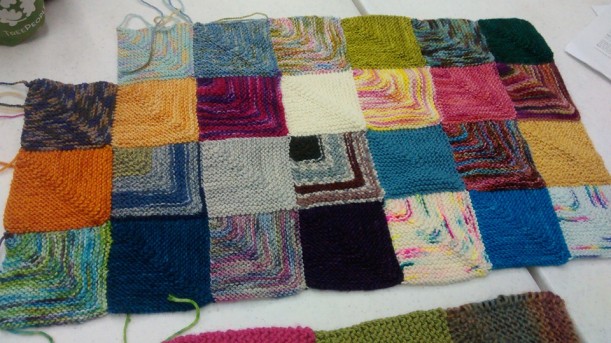 I am already thinking of the design possibilities and feeling very excited about this new addition to my knitting repertoire.

I’ve had a couple of people ask me about using the Magic Loop method when knitting in the round, so I thought I’d share some photos in today’s blog post.

I was feeling too lazy to start a new sock and do a detailed, step-by-step tutorial, so for now I just took photos of my current Cabin Fever sock in progress.

Anyway, when I’m knitting in the round with the Magic Loop method, I’ve got the stitches evenly divided so that there is a front and back: 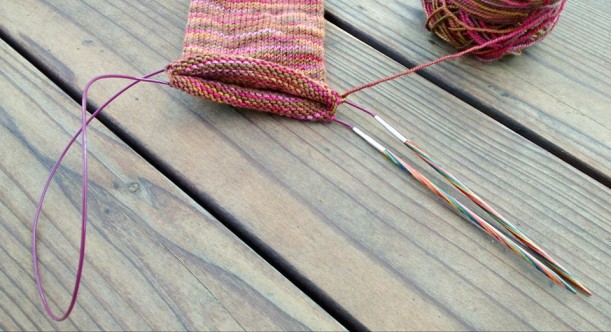 In the above photo, the top row is knitted and the bottom row is waiting to be next.

To start knitting the next row, I just take the top needle and bring it around, like so.

Without my fingers in the way, this is what the needles and yarn and sock and Magic Loop look like.

I knit using the Continental style.  Keeping the yarn wrapped around my finger this way helps maintain even tension.

If you look at the top row (or back side of the sock) in the above photo, you will see that the cord of the circular needle takes the place of the double pointed needles that would be there if you were using DPNs.  The front side of the sock is where I’m knitting.

I’ve been using the Magic Loop method for so long that I’m not sure how much these photos make sense to someone who’s never done it.  I’m sure there are a lot of video tutorials to be found online, so hopefully my little post here could just serve as a supplement.  Maybe later when I’m feeling more inspired, I’ll put together a more detailed photo tutorial for casting on and starting a new sock.

Remember my little pumpkin seedlings that Sean and I planted back in June?

They bore two little orange pumpkins, each one currently about the size of a honeydew melon.  They’re too small to carve for Halloween jack o’lanterns, but they are certainly cute.  Here’s one of them. 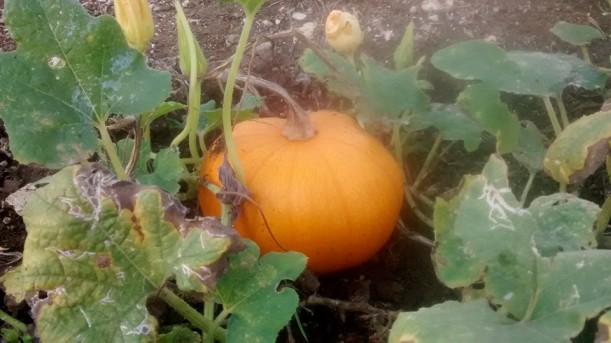 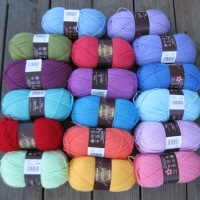