I finished the second orange sock last night and meant to take photos of the completed pair today.  Then I got home from work this evening, and this is what it looked like in Morro Bay: 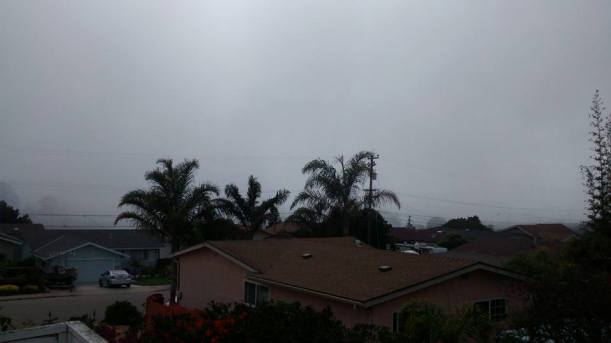 Here is a photo from April, to refresh your memory of what is normally out there:

Anyway, so there are no sock reveal photos today.  The good news, however, is that I committed to finishing the pair, they’re done, and I will be starting a new project.

Since I couldn’t get Sean to pose for today’s photo, here are the Blythes, filling in.

The morning started out nice and sunny.  Somewhere along the day, though, those gray clouds crept in, resulting in an overcast afternoon and me wanting to start a new project and not knowing where to start.  I looked at my fabric stash and paged through my quilting books and thought about half a dozen quilt top designs I could sew.  I looked at my yarn stash and flipped through back issues of crocheting magazines and thought about half a dozen things that I could crochet.  In the end, I felt so overwhelmed by all of my possible choices that I just lay on the carpeted floor and stared at the ceiling.  And then I thought about sewing a large, patchwork pillowcase cover for the floor pillow. 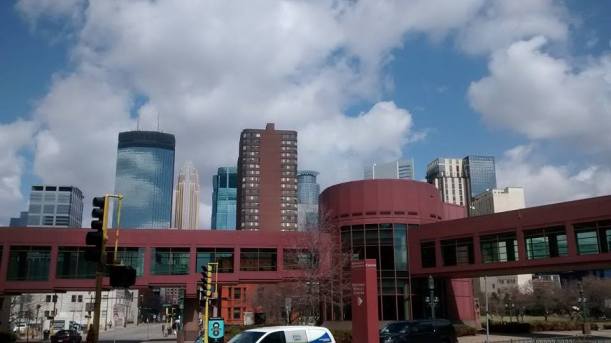 The city of Minneapolis this afternoon. You would never guess that it just snowed that morning.

See? Sean and I were walking in it just five hours earlier.

Today makes my 100th entry on this blog!  It’s also a very special day because…  well, I’ll tell you why in a minute.

Back in 2002, Sean and I went to an art exhibit in Los Angeles where different “lowbrow” artists were being featured.  One of those artists was a woman named Lisa Petrucci.  I really admired her painting that was included in the show.  That evening, I went through her whole website, enjoying her portfolio and looking at other websites that she endorsed.  One of those other websites was called This Is Blythe, and that is how I learned about the 1972 Kenner Blythe.  I was very much drawn to Blythe and became a collector shortly afterwards.

TIB had a small online forum at the time, where you could create a thread on a topic and engage in conversations with other Blythe collectors.  That’s where I met my online pal Alisha, who shared a lot of my interests and sensibilities.  She lived in Minneapolis and I was in California, but it was as if we’d grown up together and had been childhood friends.  We could have easily played with the same dolls and toys and had sleepovers and gotten along wonderfully.

As Blythe became more and more popular, the online forum grew and then was revamped to a much larger site that drew thousands and thousands more people.  Eventually, Alisha and I both stopped posting there altogether and switched over to another website called LiveJournal.  Then we each got busier with our own lives and lost touch for a while… until Facebook showed up and we found each other there in 2008.  We have been Facebook friends since then, keeping up with each other’s lives through photos and status updates.

A few months ago, Sean said to me, “The AWP Conference is in Minneapolis this year.  Want to go?”

He already knew the answer to that one.

I got in touch with Alisha to let her know that we would be flying out to Minneapolis, and she was just as excited as I was.  I looked forward to our meeting.  On Wednesday while I was inside the prison and walking among the inmates on the yard, I thought, In just a few days I am going to be in Minneapolis where it will be like a world away.  It didn’t seem real that after all these years of being online pals, we would actually get to meet in person.

Tonight Sean and I caught the light rail to downtown Minneapolis and then walked a few blocks to Pizza Luce, where Alisha and her husband and three children were waiting outside to meet us.  I couldn’t help screaming in excitement in the last few steps as we approached.  It was just like meeting up with a long-time childhood friend after over a dozen years. 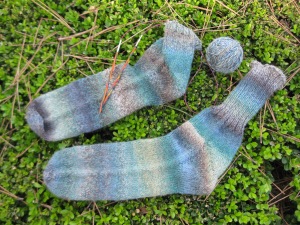 Almost done with the second sock!

Yesterday I realized that I’d left my sock knitting instructions back at the Morro Bay house, and I was pretty bummed out about that.  Then, last night I remembered:  Those same instructions were typed on a Word document that I’d saved on my laptop.  Hooray!  (It doesn’t take much to make me happy, apparently.)  So I was able to knit the gusset, turn the heel, and start the ribbing for the cuff on the second sock this morning.

When I’m in Morro Bay, I just take photos for the blog by staging my work-in-progress on the back deck or front porch, usually.  Since I’m at the Ventura homestead this weekend, I had to get creative with my photo shoot locations.  I took the above photo by placing the socks on a low hedge outside.  I also tried photographing the in-progress sock on the sidewalk.  I like the way this one came out, so I have to share it:

I originally started knitting this pair for my older brother, who may or may not be reading this right now.  As I was knitting the second sock this morning, I had a feeling that this pair might be a little too big for my big bro.  So I asked Sean to try it on.  My brother wears a size 9 men’s shoe.  Sean wears a size 11.  He pulled the sock onto his foot, and it fit him perfectly: 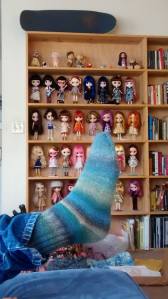 This photo tells you a lot about us. Skateboard. Dolls. Books. And I’ll admit that mess on the floor is all me. I’m too busy being creative to bother with cleaning.

So it looks like Sean just got himself another pair of socks.  Tomorrow I’m making him be a sock model again. (Remember the first time?)  I’m thinking the Ventura Promenade will make a nice backdrop.  Stay tuned.